Dan North mentioned at one point in the CukeUp 2015 panel yesterday the notion in theology of a community being a "bounded set." Since Tom Stuart had been gracious enough to invite me to participate in the panel, towards the end of the session I joined the panel so I could expand on Dan’s comment. I pointed out that the same theology also talks about the notion of a community being a "centered set." To me, this is what BDD really is: A centered set, rather than a bounded set. In other words, BDD is a centered community, rather than a bounded community. 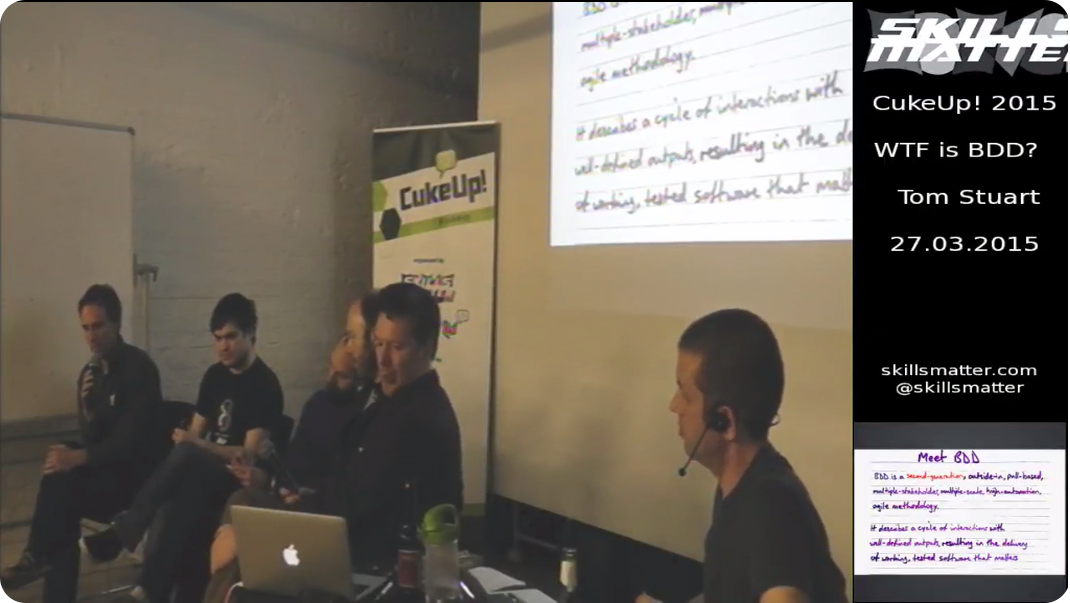 I want to be clear what I meant by bounded vs. centered set as it applies to a community when I proposed it in the CukeUp 2015 panel. These terms originated in a theological context with the writings of anthropologist and missiologist Paul Hiebert, in terms of what makes a person a Christian. I’m going to quote and adapt a significant amount of the content from his original article in what follows to make it relevant for those without a background or interest in theology. Before I do that though, first a little background is in order.

The CukeUp 2015 conference at Skills Matter in London culminated yesterday in an wonderful panel discussion about what BDD actually is, organized and facilitated by Tom Stuart. I highly recommend anyone interested in current thinking in BDD watch the video posted by Skills Matter at https://skillsmatter.com/skillscasts/6174-wtf-is-bdd. 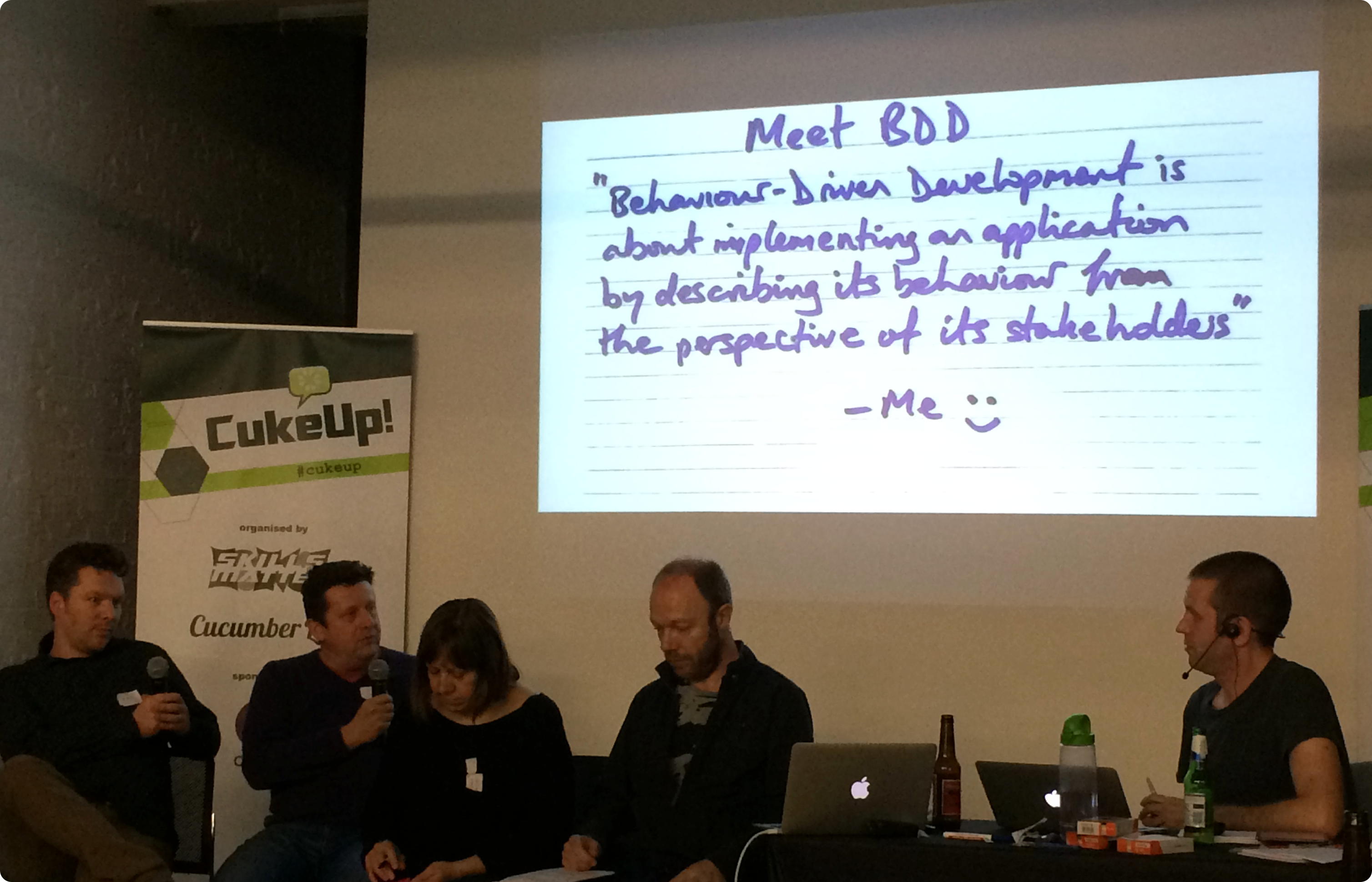 It seemed clear to me from the sentiments expressed in the session that focusing on boundaries and exclusion is not what the BDD community has ever been about. BDD is a community with values and principles at the center that promotes a certain growing body of knowledge and cloud of practices.

But there is no interest the BDD community in adopting a bounded set approach, and staying static by "locking down" the body of knowledge or cloud of practices that currently makes up BDD. Rather, the BDD community wants, and needs, to continue challenging the status quo and incorporating new learning and practices as they reveal themselves in the future.

In his 1978 article[1] , Hiebert notes that many of our words refer to bounded sets: "apples," "oranges," "pencils," and "pens," for instance. What is a bounded set? How does our mind form it? In creating a bounded set our mind puts together things that share some common characteristics. "Apples," for example, are objects that are "the firm fleshy somewhat round fruit of a Rosaceous tree. They are usually red, yellow or green and are eaten raw or cooked."

Bounded sets have certain structural characteristics — that is, they force us to look at things in a certain way. Let us use the category "apples" to illustrate some of these:

What if BDD was a Bounded Set?

BDD, as understood by leaders within the community, is clearly NOT a bounded set. Rather, it is a centered set. Let’s see what we mean by that.

There are other ways to form mental categories. Hiebert says a second way is to form centered sets[2]. A centered set has the following characteristics: 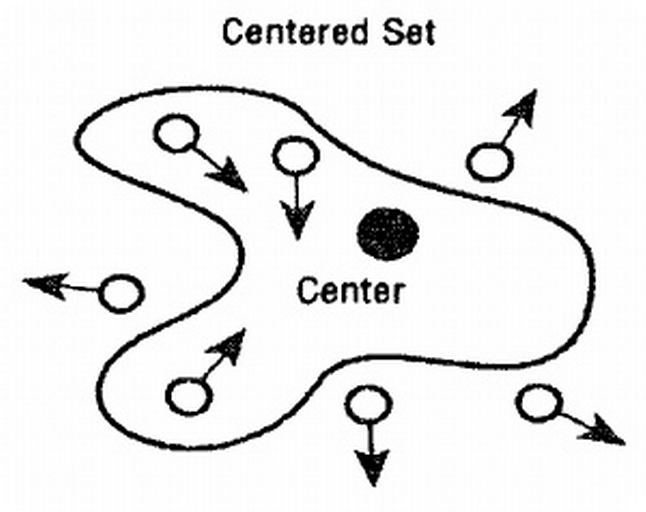 Illustrations of centered sets are harder to come by in English, since English tends to see the world largely in terms of bounded sets. One example is a magnetic field in which particles are in motion. Electrons are those particles which are drawn towards the positive magnetic pole, and protons are those attracted by the negative pole. The diagram here is another way of visualizing a centered set[3].

BDD as a Centered Set

In contrast to a bounded set, how does the concept "BDD" look defined as a centered set as I propose?

Being a centered set, growth thus is an essential part of practicing BDD. When a team begins doing BDD, they begin a journey and should strive to continue to move towards the center. There is no static state. Learning BDD is not the end, it is the beginning. We need good BDD education, mentoring and coaching to teach BDD to the many beginners who will join the community in the years to come, but we must also think about the need to continously improve and inspire novices to move beyond following recipes and so-called "best practices" and experiment with tailoring BDD to their unique context.

I submit that the agile community in general should also be considered a centered set, with the agile manifesto as the central value statement for the movement. Whether BDD, or agile in general, being a centered community rather than a bounded one must involve always seeking to not only uphold but also increase the gravitational pull of the values at the center.